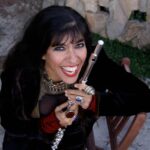 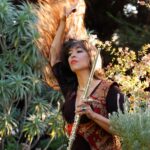 As she is taking a short moment off her various projects, Viviana is enjoying a hot cup of coffee and talks to us about the fascinating journey her life has been. Born in rural Chile with a dislocated hip, her first dream was to become a dancer. Everyone considered this to be an impossible wish. Her will turned out to be stronger than the scepticism of her doctors, though. She moved to the USA, had a string of succesful surgical operations, took ballet classes and started studying medicine – before surrendering to her artistic urge and becoming one of the leading flute players of her generation. In the course of many tours and recordings, she has displayed both the desire to combine the classical repertoire with latin american and modern sounds, as well as trying to lend a little hipness to what many consider antiquated music. Her disarming character and her abilty to turn doubters into believers have meant that she can perform at Carnegie Hall with a program of Telemann and be awarded the “Best Morning Music” certificate by talk show host Oprah without anyone thinking less of her. And the same boundless inventivenes she displays in her oeuvre can be found in everything she does: She has now recorded a video and a collection of poems is also available. With a big tour scheduled for the end of the year, this is a well-deserved coffee for sure.

Hi! How are you? Where are you?
Hi there! I’m in French Polynesia at the moment, sipping some coffee, overlooking the spectacular colors of the ocean here in Bora Bora after my scuba dive this morning.

What’s on your schedule right now?
I just finished a 30 concert tour in the USA with my quartet and now I’ll be enjoying a few months of touring internationally, Portugal, Spain, Italy, Greece, Bali, Australia, Chile, Ecuador, Brazil, Peru, Argentina. Starting December 2006, I’ll be based out of Buenos Aires rather than San Francisco as I’ll be touring South America for 3 months.

If you hadn’t chosen for music, what do you think you would do right now?
Well, I since I started off studying medicine, I suppose could be the Neuro-Surgeon I was originally intending to become. But somehow, now I can’t imagine doing this!!! I think, perhaps I’d be focusing more on my other creative talents like dance, photography, poetry, composition.

What or who was your biggest influence as an artist?
My biggest influence was my dear genius-teacher, Albert Tipton. He was both a magnificent teacher, player as well as a most noble person. Also, while a student at the Juilliard School in New York City, my encounters with Zubin Mehta, James DePriest, Leonard Slatkin were most influential, and then as a member of the New World Symphony, I very much enjoyed Michael Tilson Thomas. My concerts with Mikail Baryshnicov and Placido Domingo were also great contributors to my life.

What’s the hardest part about being a musician and what’s the best?
The best thing about being a musician is being able to move people through music. Since music is the international language, it’s really been a blessing for me to instantly strike up relationships with musicians around the globe, whether it is the Grand Bazaar in Cairo, or with the natives in Machu Piccu, or in Lincoln Center in New York City. Because I’m such a gypsy at heart, I love the traveling, performing and sharing. I wouldn’t want to be only in one place. I very much enjoy the cultural exchanges that happen while I’m traveling.

The worst part of being a woman musician, is that it’s hard to find a “wife”!!! By this, I mean, I would love to find a man who wouldn’t mind staying at home raising the children. If I had been born a man, I am sure I’d have 5 children by now! Unfortunately, I find that this is where it is more difficult to be a woman traveling musician than a man.

What’s your view on the classical music scene at present? Is there a crisis?
I think that there most certainly is a crisis. In the USA, it’s very difficult to find media support. Also, the the schools are eliminating music instruction in schools, so I wonder where will we find our audiences in the future. When I play a classical concert, almost exclusively, my audience is 65 years of age, or older. What will happen when these people pass away? Although, like Shakespeare, I don’t think that classical music will disappear entirely, I do fear for its health in the future. I always only hear of how difficult it is to promote classical music and how few people support it. I think it’s mostly the media’s fault for not supporting it enough. If classical music were as popular and “hip” as MTV, I think we’d be living in an entirely different world. It’s sad, really.

Some feel there is no need to record classical music any more, that it’s all been done before. What do you tell them?
In addition to my classical albums, I also am constantly exploring new genres for the flute. I’m using this as an experiment, a creative outlet, as well as a deep challenge that I am gladly embracing.

What constitutes a good live performance in your opinion? What’s your approach to performing on stage?
I love it when I feel completely relaxed and at my best. Then, if the audience really responds to my performance, there’s really nothing like a powerful standing ovation. My performances go into another realm the more I repeat the same program consecutively. For example, after a 10 or more concert tour, I’m loving the stage and the responses. There’s nothing as sublime as this!!!!

True or false: It is the duty of an artist to put his personal emotions into the music he plays.
Duty? I never thought about it in this way. Some performers don’t play with emotions, and can offer a brilliant technique. I am a very emotional player/person, so my music will always have plenty of this and, as a result, I tend to prefer emotional performances. But I don’t know about using the word “duty” to describe the process.

True or false: “Music is my first love”.
False. My first love was dance! I always dreamed about becoming a famous dancer. But I was born with dislocated hips in a small town in Chile, and I was told that I would never walk. Perhaps it’s life’s challenges that have always allured me. I ended up having to move to the USA for the better medical doctors. And it was when I was in my body casts that I learned to play music because it was the only thing I could do since I couldn’t move my body!! Later, when I had to go through physical therapy I combined this with ballet classes. I was so happy!! But I was always severely limited by my own body. After 10 surgeries (the last one being in 1999), I am happy to say that I am physically better than ever, traveling and performing across the globe with no more physical pain. Yes!!!

True or false: People need to be educated about classical music, before they can really appreciate it.
False. I just think they have to be exposed to it. I think that the only reason that our Rock bands today become so big was because of all the exposure they get. Verdi and Paganini, had loads of media attention and as a result, enjoyed “rock star” status equivalent in their time.

You are given the position of artistic director of a concert hall. What would be on your program for this season?
I am the classical director of a small chamber music 200 seat concert hall on the ocean in Half Moon Bay, California. In the past years I have presented the following a variety of different ensembles such as the Eroica Trio, St. Lawrence String Quartet, Ahn Trio, Thibaud Trio, Alexander String Quartet, Ying Quartet, etc. Chamber music is my favorite genre. Unfortunately, there is a limited repertoire for the flute.

Have you ever tried playing a different instrument? If yes, how good were you at it?
I played the accordion, piano and clarinet before I started the flute. Just recently, I started with voice lessons and guitar lessons. I’m loving it!