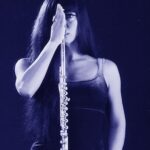 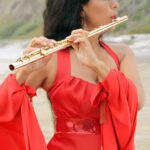 Coastside resident Viviana Guzmn – poet, actress, dancer, and now hailed as one of the best flutists in the land – will delight Pacifica audiences with tango music Saturday evening.

Appearing through Pacifica Performances/Concerts by the Sea, she is joined by members of her Performers of the World plus her mother, accordionist Clara Guzmn.

Their concert, “The Music of Passion: From Tango to Flamenco,” mixes sensual and smooth.

Hailed by the New York Times as “an imaginative artist,” Guzmn started her career by studying at the Juilliard School and debuting at Carnegie Hall, and studied with flutists Jean-Pierre Rampal and James Galway.

She has played with major symphonies and in 56 countries, and with artists John Denver, Mikhail Baryshnikov and Placido Domingo.

She blends dazzling virtuoso technique with diverse traditions from indigenous cultures. She incorporates the 50-plus flutes and other wind instruments from around the world collected on her travels.

Recently, she formed Performers of the World, both a band and a production company which produce world music and dance.

Argentine-born guitarist Guillermo Garcia studied classical and tango guitar and electronics engineering. With a master’s degree in audio signal processing from the University of Paris, he created the vocal soundtrack for the 1995 Oscar-nominated movie “Farinelli.” Currently, he is working on a doctorate in computer music at Stanford University, and has released a CD of tango music.

Also joining Guzmn will be percussionist Kevin Mummey, who has performed in several countries in Europe as well as in Greece.