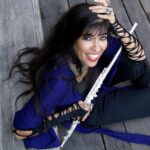 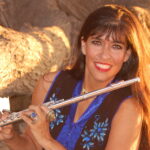 Acclaimed as one of the world’s greatest flutists, Vivian Guzman originally focused on music as a means of coping with childhood physical challenges.

“I was born with dislocated hips,” Guzman explained. “I was never supposed to walk. I had 11 surgeries. When I was little, I had a lot of body casts. And all I could do when I was in the body casts was read or, when they flipped me over on the hospital gurney, I could play the piano. So that’s why I did well in school and learned music.”

She’s now based in Half Moon Bay, California. But Guzman was born in Chile. She came to the U.S. for medical treatment.

Trapped by the body casts, music transported her, providing a release. “I’ve always said that it was music that healed my life, because it was through the music that I found the expression to be able to go through all the difficulties that I had to go through, physically and emotionally. So it was just a beautiful way of expressing all of that.”

Her mother plays piano and accordion, so Guzman began her musical journey by playing those instruments at age five. At eight, she added clarinet and the following year, the flute.

“It was primarily practical reasons that kept me with the flute. The clarinet was heavy to carry to and from school. The flute was much lighter. And I had very weak hips. It was as simple as that. To this day, I’m thankful for it, because I don’t have to lug a cello across the planet. I just stick my flute in my backpack and away I go.”

Guzman sometimes adds dance to her world music-oriented performances “I had to do physical therapy and that was boring for a child, so I chose dance as alternative way of exercising those muscles that needed it. That was more enjoyable.

“Later, it turned into belly dancing, because that strengthens the exact muscles around the hip area. I continue with that. Not only is it recreational and good for me, but I fell in love with it in the process.”

At 13, Guzman won a competition that earned an invitation to attend, on fellowship, the Aspen Music Festival. By 16 she had played as a soloist with orchestras, studied with renowned flutist Jean-Pierre Rampal and played on a John Denver TV special.

“It just evolved fairly quickly and I believe it’s as a result of the fact that I had started my musical studies so young and I was very dedicated from a very young age, as well,” Guzman said.

She actually viewed music as a hobby and planned to become a neurosurgeon. But she became flutist for the Houston Grand Opera and her teacher encouraged her to pursue a musical career.

Though classical is Guzman’s first love, she has also gained prominence as a world music artist.

“As I was looking for ways that I could make a living as a flutist, which is pretty limited, I realized, if I branched out into different styles of music – tango, flamenco, samba, mambo, all of which used the flute – tt opened up a whole other arena for me. Eventually, I started making more money playing that style of music, rather than the classical.”

Though she has toured the world extensively, Guzman still relishes travel. “I was just in Brazil. I’ve visited that country many times, but it’s always unbelievable how refreshing it is, every time, when I hear all the music and see all the dance. It’s such a part of those people’s lives on a daily basis.

“I love exploring. I love traveling and I love performing. I feel very thankful to be doing a lot of both.”

Guzman endured her last hip surgery in 2008. “Finally now, I’m pain-free and limp-free. But it’s been a very long road.”

The physical recovery took great determination on her part. “That’s the key to music, as well, especially classical. There’s a lot of discipline involved and perseverance is very important. Keeping a positive attitude is also mandatory, if you want to survive as a professional musician.”

She laments the dwindling audience for classical music. “Classical music is incredible. It will never disappear, like Shakespeare will never go away. But it is sad that it doesn’t get the exposure that a rock star would, for an example.”

Guzman, whose creative passions also include poetry and photography, is a star in both classical and world music. “The beauty of classical music is that you’re always seeking even more perfection. There’s always more to learn from each piece. You can always get better.”

Her upcoming performances include concerts in San Jose, Ca., Edinburgh, Scotland, Victoria B.C., Juneau, Alaska and Bangkok, Thailand. Her diverse and delightful recordings include “Argentine Music,” “Meditations for Flute,” “Mostly Tango Live” and the classical “Telemann Fantasies.” She has performed with such music greats as Placido Domingo.

Though she chose music over medicine as a career path, Guzman, often called,“Queen of the Flute,” enhances people’s lives.

“There’s nothing more enjoyable than having an audience member send me an e-mail saying, ‘I was so moved by your music and it inspired me to do such-and-such.’ That’s what I live for.”