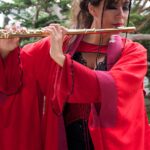 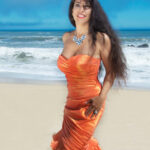 — — A professional flutist who takes her instrument with her when she paddleboards off the coast of California got the surprise of her life when a whale lunged out of the water so close to her that it brushed her board.

Viviana Guzman was paddleboarding in California’s Half Moon Bay last week when the whale surfaced in a feeding lunge right next to her.

“When I screamed, it turned away from me. It surprised me, and I surprised it,” she told ABC News today. “It could have totally toppled me, but he just gently went away, went under the water.”

Guzman, who lives near Half Moon Bay, described the whale as “like an iceberg.” She said she often plays her flute while paddleboarding — which she said catches the attention of whales.

“I feel like they’re curious about the flutes and they come towards me,” she said. “I started my usual playing, and all of a sudden one came really, really close to me.”

Guzman posted video of the encounter on YouTube, where it has been viewed more than 60,000 times.